There for You Every Step of the Way

It was a frigid day in 2013 when Colan Ratliff, 72, stepped outside his house in La Plata, Maryland, before dawn to shovel snow off his driveway. A historian and conservator for the U.S. Navy, Ratliff had just finished sprinkling salt on the driveway when he slipped on a sheet of ice and fell backward, striking the back of his head and neck as he hit the pavement.

“I’m lying there and saying to myself, ‘That was kind of stupid,’” Ratliff says. “And I thought, ‘Well, I’ve got to get up,’ but I realized I couldn’t get up. I couldn’t move at all.”

Ratliff didn’t panic, but he yelled as loud as he could. Several hours passed before a neighbor found him, alerted Ratliff’s wife, and called 911. Within minutes he was at University of Maryland Charles Regional Medical Center (UM CRMC), where Emergency Department (ED) doctors immediately stabilized and assessed him. Imaging studies revealed a disc problem, though the extent of the injury wasn’t clear. But doctors knew that his paralysis suggested something threatening.

Catering for a Life-Altering Injury

It was Ratliff’s first step on a treatment journey that would draw on numerous medical resources, none more significant than his community hospital, UM CRMC.

“It’s important to have a hospital that you can count on,” says UM CRMC Chief Medical Officer Joseph Moser, MD.

“As the frontline community hospital for our area, our providers and nurses are trained to recognize all disease processes and get people the specialized care they need even if it’s not at the community hospital itself,” adds Richard Ferraro, MD, UM CRMC’s chairman and chief of staff, and medical director of the ED. “Luckily, we are part of a system that can provide comprehensive care for just about any condition imaginable and is among the nation’s leaders in some of these fields.”

In fact, ED doctors determined that Ratliff needed to be airlifted to the University of Maryland’s R Adams Cowley Shock Trauma Center in Baltimore.

“Just like many emergency conditions, including stroke and heart attack, when it comes to spinal cord injury and compression, time is really of the essence,” says Dr. Ferraro.

There, surgeons established that Ratliff had suffered an injury to the C4 nerve, which typically causes paralysis in the arms, hands, trunk and legs. They prepared him for surgery to decompress a herniated disc pressing on his spinal cord and fuse his spine to protect it from further harm.

Ratliff had served as a Marine in Vietnam and had suffered a serious and more painful injury to his head and face while there. But this injury was far scarier.

“My worst fear was that I would be a burden to my family,” he says.

Surgeons told Ratliff’s wife, Grace, that he likely wouldn’t walk again, but, she says, she never doubted that he would.

“He’s stubborn,” she says. “If he puts his mind to something, he’s going to do it. I just knew he would.” 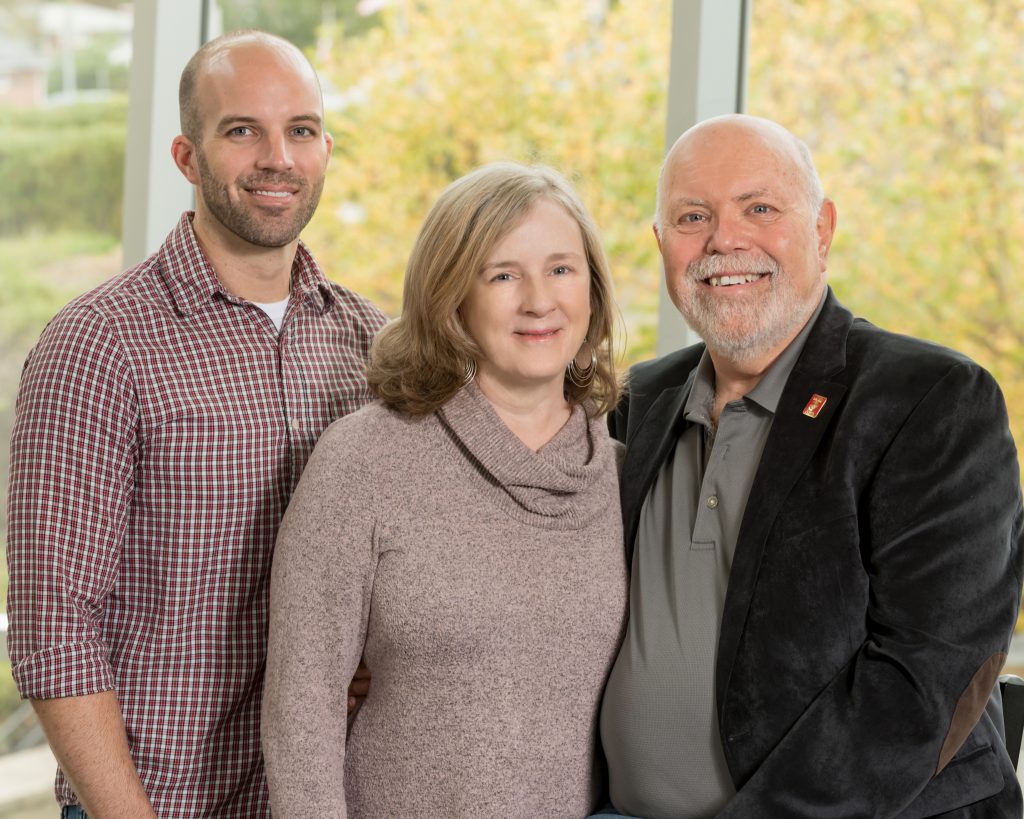 (From left to right) Ethan, Grace, and Colan Ratliff

Recovering with a Will and a Way

A two-month period of rehabilitation at a nearby Virginia facility lay ahead of him, however.

“Rehabilitation is very important because during the time that the spinal cord is injured and nerve signals are not getting down to the muscles in the hips and legs, muscles tend to shrink when they are not used,” says Dr. Moser. “By keeping the muscles and tendons strengthened and flexible, if the nerve signals can come back, the function of lower limbs is much easier to recover.”

Ratliff made the most of the opportunity.

“I realized that I had to take advantage of everything they were offering me,” he says. In the beginning, nurses dressed him for his therapy sessions. “But then after I got some more movement back, I wanted to be ready when they came and got me. And oftentimes, I was waiting on them. I was ready to get started on all the activities and exercises that they had for me.”

There were days that Ratliff felt like staying in bed.

“But I couldn’t do that,” he says. “Being in the Marines helped in that regard because when that drill instructor flipped the light on, you were on your feet ready to go. And they didn’t want to hear that you were tired. I told my wife, ‘I’m going to walk out of this hospital.’”

At the same time, his family did everything they could to boost his recovery.

“We knew my father had nerve damage, we just didn’t know to what extent,” says Ratliff’s son, Ethan. “But I knew that if he could move something, that he could improve. And because he could not move anything on his own, I had to help him. So I would massage his arms and legs to get blood flowing to the nerves. Every time I went there and helped him out, he gained more movement.” 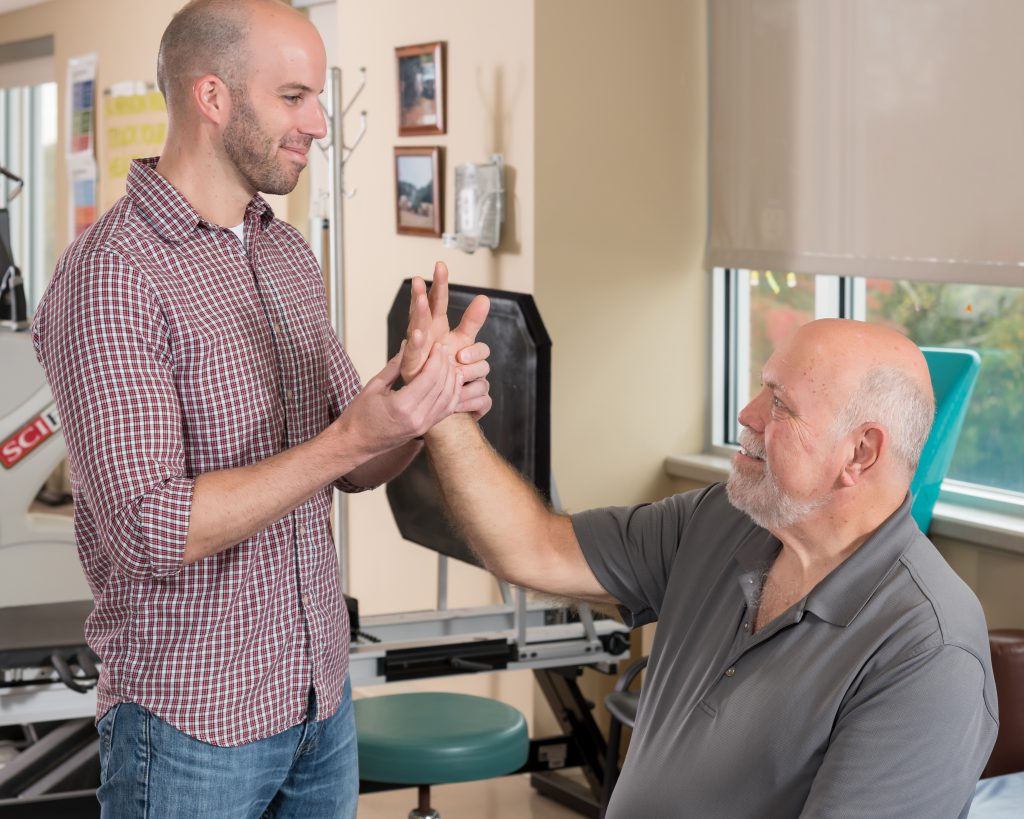 “One of the things that I drew on a lot was the fact that my family was by my side,” Ratliff says. “I had someone there nearly every day.”

Physical therapists also kept challenging Ratliff and motivating him to do more. He spent many hours on a stationary recumbent bicycle and was strapped into an anti-gravity treadmill, a machine that uses air pressure to reduce gravitational forces on patients, allowing them to experience the motion of walking without being encumbered by their body weight.

Slowly, Ratliff began to regain his function until the remarkable moment when he took his first steps with a walker. He made so much progress that his rehabilitation was extended by two weeks to capitalize on these gains.

“When you leave the hospital, they wheel you out in a wheelchair and they usually wheel you over to the car,” says Ratliff. “I stopped the lady and said, ‘That’s as far as you’re taking me.’”

He stood up and walked to the car, fulfilling his promise to his wife.

“When I got up after I sat any length of time, the back of my legs were very tight,” he says. “It made me shuffle a little bit.”

UM CRMC coordinated with its healthcare partners to transfer Ratliff’s care back to the hospital. Back on home turf, he again threw himself into the activities that his therapists prescribed. The hospital works with patients to create an individualized treatment plan tailored to their needs. In addition to physical therapy, UM CRMC’s rehabilitation department — part of the UM Rehabilitation Network — offers other forms of therapy. 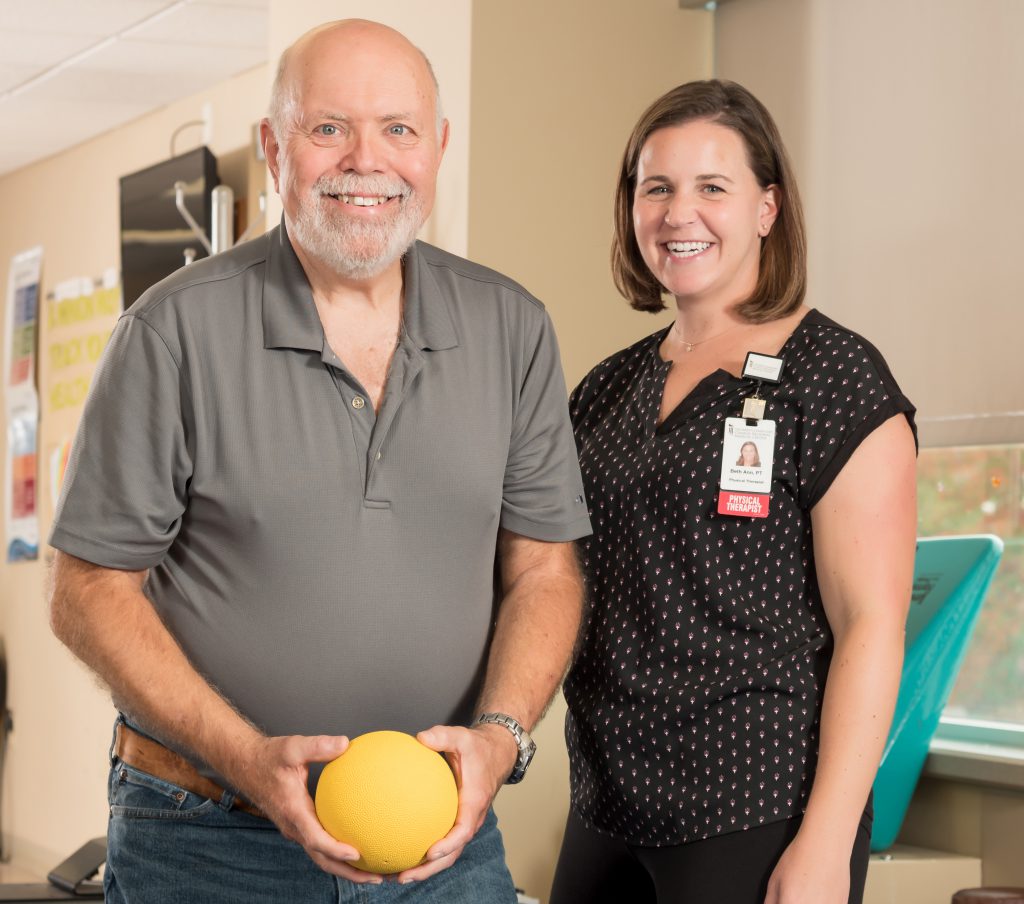 “Our facility is one of the few in Charles County that has physical, occupational and speech therapy in-house,” says Beth Ann Galligan, DPT, a physical therapist at UM CRMC. “That’s a plus for patients with complicated injuries like a spinal cord injury. You can see all of us in one day and not have to go to different facilities. We’re all working together to help you get better.”

Because Ratliff had no speech issues and the use of his hands had improved greatly, therapists focused on strengthening and stretching exercises and other types of physical therapy. They also aimed to improve his walking and limit his need for assistive devices, like his walker.

When he first began walking, Ratliff could only manage 100 feet, but the team worked with him to go farther and farther distances. When the weather allowed, Galligan took Ratliff outside to practice taking steps on different inclines and surfaces.

“He never complained of pain,” Galligan says. “He was always determined and positive. When you’re in that mindset, you’re so motivated, it makes therapy go well because everybody’s on board with getting you better.”

On his last day, Ratliff walked more than 1,200 feet without an assistive device. “I’d say I’m back 95 percent,” he says. “I can’t run. But I get on my bicycle and go 13 miles or so, and I try to get a little faster each time to get my heart rate up.”

Ratliff’s experiences at UM CRMC bookended his treatment for his spinal cord injury. But he has ongoing ties to the hospital. Four of his grandchildren were born there, and his family has received care there for other medical needs.

Last fall, Ratliff saw a diabetes educator and took group classes to stay on top of his blood sugar — another key health objective. He was diagnosed with diabetes eight years ago.

“I was surprised to learn that I was already eating pretty healthy — the right amount of sugar and salt,” Ratliff says. “But there are other things you can do.” He found out he also needed healthy snacks to keep his blood sugar levels steady.

After sitting down with a diabetes educator, patients typically sign up for four two-hour group classes covering a range of topics on diabetes management. Since he started the process, Ratliff’s weight has dropped, and his blood sugar is starting to go down. 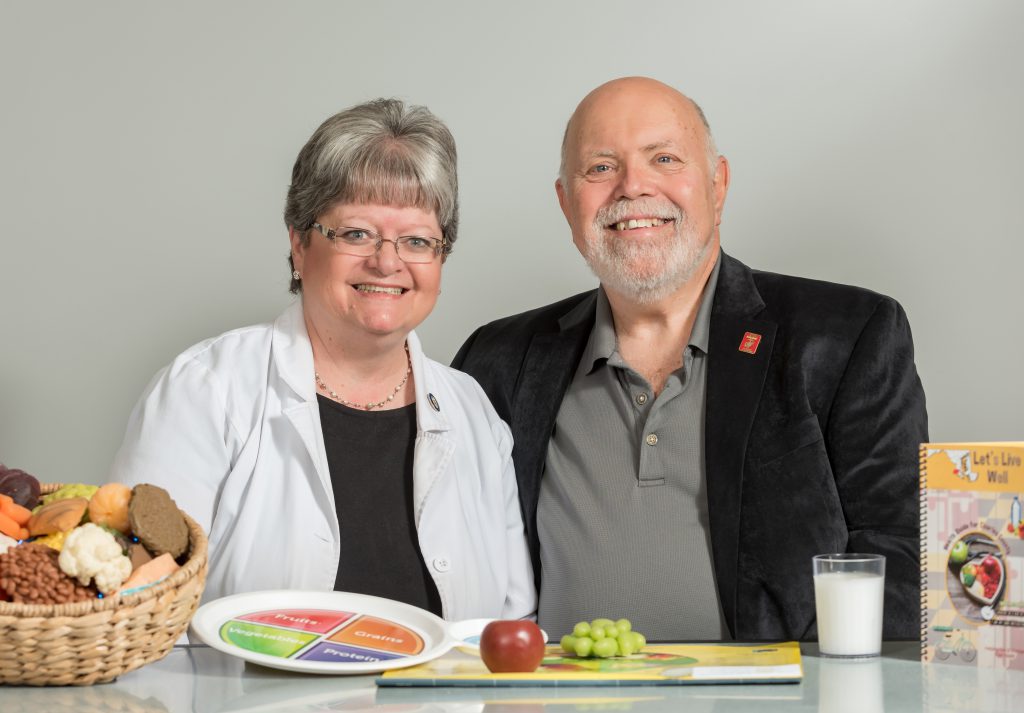 “We’re affirming what they are doing right and then guiding them in baby steps to make more and more helpful changes,” says diabetes educator Cindy Adams, CDE.

Ratliff is grateful that UM CRMC has had his back in large and small ways, though he confesses that he doesn’t like hospitals very much.

“Nevertheless,” he says, “Charles Regional was there for me. They sent me on my journey to recovery, and they were there when I went to rehab and continued my recovery. It’s nice knowing they’re here.”

“We are the community’s first stop for injuries, and if we can’t help, we have exceptional health care partners who can,” says Dr. Moser. “From Emergency Department services to patient education, our goal is to serve.”